I’ve just been reading about Bocker Labradoodle on that Facebook thingy. I’m sorry to tell you that he died this week. That’s another blog I’ve started with bad news. Sorry. 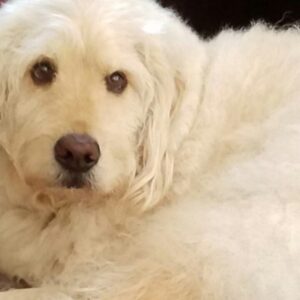 Still, it’s not all bad. I’ve been on a couple of new walks lately and on quite a few of my usual ones too. I went to some woods at Haughmond Hill on what was described as a twenty-minute walk, which I can just about manage, but it was much longer than that. So I was glad to get back to the beginning even having a rest on the way. There were lots of new smells for me and I was allowed off the lead once we were away from the busy area. Mummy didn’t like it because it was too busy and organised, with lots of signs posted everywhere. She liked the walk in the trees at Grinshill, where we only saw one person and no signs at all.

Near Grinshill there is a dog rescue centre and they are having a Fun Day next week. Goody. I quite like those although I do make a bit of a noise at other dogs. But when the day came we went somewhere completely different . . . we went on holiday! Yeh!

We were travelling for quite a while, but stopped a couple of times on the way. Firstly we went to a tiny railway station, where a steam train stopped while we were there! We had a little walk down to the river, which was nice. Then we drove through some mountains and there were lots of people on bicycles riding up steep hills for 24 hours!! Eventually we reached an airfield . . . well there’s a surprise; but it was by the sea and I’d been there lots of times before. We shared breakfasts then went on to the cottage where we have also stayed before. That’s the one on the farm with the easy-care sheep. Unfortunately, this time I fell in the cattle grid and couldn’t get out. Some nice people came to rescue me, but I didn’t like it much. We didn’t walk that way again.

The next day we had two lovely walks along the dunes, which was fantastic. And the wind was so strong it was blowing up my b . . .! But I didn’t sleep very well that night and struggled to walk on the slippy floor with my bad legs. The day sort of went downhill from there on. We’d gone to look at the rough sea along the coast and I had a really bad fall when we were near South Stack Lighthouse and couldn’t get up. I was floundering about on my back with my legs in the air. Then I tripped again and my head slipped out of my collar. And then, later, when we went for a paddle at a little beach I got my feet stuck in the sand as a big wave came and nearly knocked me over. Luckily mummy grabbed my collar and held on tight. It was quite an exhausting day altogether really, for an old chap like me.

One day it poured with rain, so we went to the forest in the morning and then after lunch we had another walk along a funny sort of promenade across a river near the forest. By the time we got back to the cottage the sun was shining; but it was nearly my tea time so I just hung about waiting.

At other times we went to the beach for a paddle and I got stuck again; and had another walk in the woods. On the way home we paid another visit to the dunes and then stop a couple of more times for me stretch my stiff legs. At one place a lovely lady gave me some of her ice-cream! So I had a great time.