My very first really big boo-boo to relate . . and what a good one it was too. I was walking with mummy one afternoon and I took her down onto the Rugby field, which lead to some hay fields that had recently been cut, so that I could have a good run around. Anyway, as we got onto the Rugby field I shot off towards a football. Odd, mummy thought, because I didn’t usually play football. What she hadn’t seen, but I had, was a tiny terrier of some kind behind the football (the ball was bigger than the dog). Mummy called me back but, of course, I didn’t listen and charged headlong into a little boy, who was in my way, knocking him over – I just ran straight through him as if he wasn’t there. (Oops.) No manners you see. I completely ignored him flat out on the floor and just carried on running. Needless to say mummy was terribly embarrassed and checked to see that he was ok. I’m sure it would be exciting and lots of fun to tell all his friends at play-school all about it. Of course I lost my chance of running around off the lead after that, didn’t I?

I’m afraid I have some sad news to impart. You’ll remember Woody Wood Mouse of course, because of that lovely picture I sent you last time. Well a few days after that mummy found him in the bottom of a bucket. He must have slipped in and not been able to climb out again. Oh dear, poor little Woody.

Well then, who was that we saw a couple of nights later scuttling about the patio looking for food? Hmm, if there had been two mice . . Oh-oh. A couple of weeks later we found another dead one in the street. I wonder if there are any left, because now that the evenings are dark I can’t see if there’s anyone running around the patio.

You’ll just never guess where I’ve been recently. No-no, not Cornwall (maybe next year) but I have been to Anglesey for a whole week’s holiday! Oh this is the life, I don’t think I’ve ever been on holiday before. WOWEE, I was so excited I barked a lot especially on the beach.

We stayed in a little cottage on a farm where they had lots of Easy-Care-Sheep. Uh? 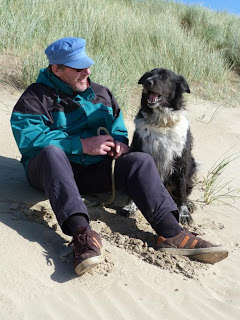 Each time I went for a walk from the cottage I had to step across two cattle-grids going out and, of course, the same two coming back. I only slipped a couple of times in the wet, which I thought was very clever of me.

I went to the forest a few times and onto the beach most days. It was great fun and I thoroughly enjoyed myself, as you will see from my pictures. The dunes were full of lovely rabbit smells.

I met lots of dogs and behaved myself most of the time. Everyone I met said how gorgeous I was. Some liked my face and others liked my speckled socks. Others laughed at me when I barked. Whenever my humans sat down for a rest I barked because I just wanted to keep on going – forever.

One day my humans stopped to talk to some other humans with a 4 months old Cockapoo. She was a busy little girl and I completely ignored her. Mummy said the poor little thing would be exhausted after the miles she’d run that morning. The lady said that the puppy was naughty and wouldn’t come back when she was called. What did she expect at 4 months?! She’s lucky she came back at all. Mummy said it might be an idea to have lessons. I think she meant the lady as well as the dog. 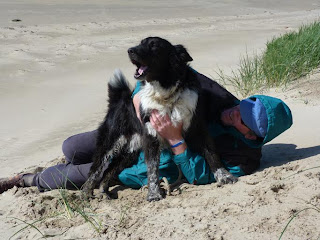 Mummy wanted me to swim but I only paddled – may be next year, if it’s warmer. Well she didn’t swim either, did she?

I’ve been wearing uncle Jake’s collar for quite a long while now. It’s black with a short chain fastening. With all the wet weather this year plus the sea water it has started to go rusty and made horrible brown marks on my lovely white bib. Mummy threatened to send me back to auntie Helen for a bath, but luckily Chris said ‘no’. Phew. So . . ugh, mummy gave me a wash one sunny afternoon. Just my bib, not all of me thank goodness. I kept running away and she cheated by enticing me with bits of Schmacko, which I like rather a lot. Anyway eventually we got it all over with and, even though I say it myself, it does look better. Later the same day Chris took me to the pet shop to buy me some more bonios and a new collar. It’s a rather smart murky green colour with no rusty bits. He had me weighed at the same time – I was 38.3 kilos, so not much different from previously. 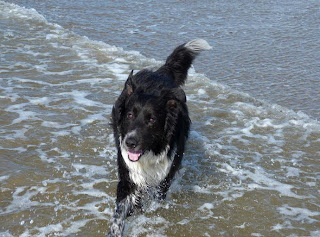 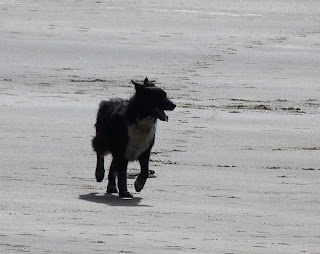 The very next day I took mummy to ‘the park’ in the afternoon and had a good run around. I met George G Dane with Tilly Newfie & their other smaller house-mate. Tilly and her friend went in the river but George wasn’t so inclined. I grumbled all the while we were together – I think three against one (me) is too many and anyway I was trying to look after mummy. She wouldn’t let me go in the water because she didn’t want me to get mucky, not that I was really bothered. Later, on our way back from walking along the river bank, I met a lovely little girl Labrador swimming in the river after sticks. It looked good fun so I disappeared down the bank and straight in the water. I could hear my name being called out, but I carried on swimming across to the other side. It wasn’t very wide, but too wide to jump across even for me. The man said to mummy “ . . that wasn’t part of the plan?!”. Oh crikey, I’ve gone and done it again. When we got back to the car there were no towels to dry me off, ‘cause they’d been washed the day before. So I had to go home dripping wet. Mummy said I stank and was making the car smell horrible! I heard her say something like I’d be in for a bath tomorrow. Groan. But what really irked her was the fact that she’d wanted me to swim in the sea on holiday, but I wouldn’t. There’s just no pleasing these humans is there? Some day’s later mummy took me to the woods for a run round and twice I went into deep muddy ditches before she could stop me! Ha. Then when we got home she hosed me down. Eek, that was a bit cold. She said not to be a wimp, it couldn’t have been any worse than the river. Hmm.

A few days later I had a horrid surprise when Chris approached me with towels, a bucket of warm water and a bottle of shampoo. Still it was a lovely hot morning and I really was ever so good and stood very still till it was all over, when I got biscuits for being a good boy.

Would you believe it, we saw two more wood mice in the garden the other day. It was so terribly windy the little one could hardly walk he was being blown about so much. Later on I ate my biscuits on the lawn so that they might have the crumbs.

Oohh, I think I’m in love! I was walking along the canal with Chris one morning and a narrow-boat sailed passed with a puppy Collie onboard. She was gorgeous. A short while later the boat moored up and the puppy jumped off to come and see me. Her name was Ziva and she was only 9 months old. She kissed me on the nose and I was all hers. I went on the boat with her, oblivious to Chris calling me back. The boat sailed off with me still onboard and Chris was left on the tow-path. I had a wonderful time. When the boat reached the next bridge I said a fond cheerio to Ziva, jumped off the boat and went back to Chris. Oh, I do hope I see her again soon.

Did you know – it’s just twelve months since I moved in with my humans? They sang me a song and took me a really long walk and we had a little picnic. Whilst we were out we saw a horse being taken to the clinic for a flu jab. It was such a lovely day and I enjoyed myself so much that I went a bit sulky when we got home because I wanted to do it all again. Anyway to top it all off I had a yummy bit of sausage with my tea.

By the way, mummy says she loves the children’s art work on the website – it’s really very good.

Actually, I was hoping to see my September newsletter on my blog page. Perhaps some nice human would add it at the same time as this one please. Many many woofs.