Hello. The first day of March, or so I am told, is St David’s Day. Lucky for me it was a reasonably nice day for weather. My humans did some work outside for a bit, after I’d had a little walk in the field. Then we decided it was time I had an excursion. I knew that getting in and out of the car was going to be difficult. At first I thought we were going to the vets and didn’t want to go, but as soon as we turned right out of the gate I knew we weren’t, because that was the other way! We went along the country roads to Ellesmere and parked by the back gates. When mummy opened the back door of the car I nearly fell out and she had a job of pushing me back in, which upset me a bit and I’d got my back legs all tangled up again (as you do). I had a terrible job of untangling myself and getting in the right position for going down the ramp, but managed in the end.

We walked through the trees and mummy decided to collect some fir cones. She was also wearing her new Wales Air Ambulance wellies; look . . . they’ve got red helicopters all over them! Doesn’t she look silly. 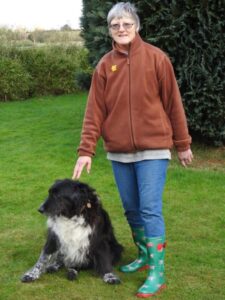 Hey, did I mention the spaniel? For the past week or so he’s been running around my field at least once a day, often twice, even in the rain. He comes with a man, but I don’t know where from. Haven’t seen them around the village before. He looks quite a young ‘un to me; runs all over the place like a demon on short legs and winding up the pheasants.

One day Chris and mummy went shopping without me! But later they wanted to take me in the car to the canal. But I really struggled to get up the ramp, and decided I didn’t fancy it after all. We all went for a walk in the field instead and just missed meeting that spaniel. Anyway, the next day I did just manage to get up the ramp and we went to Ellesmere again. It’s good for me there because it’s all on the level and I can have an easy walk. When we got back home Chris started to cut down a tree with that noisy saw thing. He said the logs would be good for the fire when they’d dried a bit. The tree was half dead anyway, because in the stormy weather some of the branches fell off.

Oh, I do struggle with the ramp and I’ve really put myself right off it. I wish my humans would listen when I say I don’t want to go up it. They keep encouraging me, then when I give in I usually have an accident of one kind or another. One day they thought it would be nice for me to go to Dearnford Lake for a little walk, but I really didn’t want the hassle. Mummy came out of the house in clean clothes and just said ‘Come on, let’s go’ and up we went. But on the way I had an accident in the back of the car and had to be cleaned up; then when we got there I fell off the top of the ramp onto the ground. Oof. We had about a ten minute walk and I started feeling a bit dizzy and fell over a couple of times, so we made our way back to the cafe. The humans had a quick coffee, then I had to get back in the car . . . I was dreading it. Anyway I managed ok. At home I just ran off the ramp as if it was nothing, but I was glad to be home. I didn’t feel very well actually and just slept for ages. It was quite late when I got my tea; but I only ate about ¾ of it. The rest had to be thrown away because I wouldn’t want to touch it again.

That night I stayed out most of the night again and only went inside for a drink. I wasn’t feeling too clever and slept a lot and ate very little. Next day Chris and mummy were busy gardening because it was such a lovely day, so I went and lay down where Chris was working. I lay there for so long that my legs had gone numb and I couldn’t stand up. Eventually I had a towel shoved under me and was hoisted up with that, but my legs wouldn’t work properly so I was allowed to lie down again. I didn’t feel up to eating any tea. I was well wrapped up in blankets and things and left to rest. Some time in the dark mummy came to give me a little drink of water, which was nice, then I went back to sleep again. I could tell she was very upset about something and I think it was me she was worried about.

By next morning I hadn’t moved more than a few inches and I didn’t want anything to drink. I was shivering even though I was snuggled up and felt warm to the touch underneath the blankets. Chris and mummy spent lots of time with me until that nice Australian vet man came to see me. I had to have two more injections; the first one made me all sleepy ready for the second one. Chris and mummy were talking quietly to me, saying lovely things; then I drifted off to sleep and I don’t remember any more after that.