I forgot to put the best picture on my last blog, so here it is – 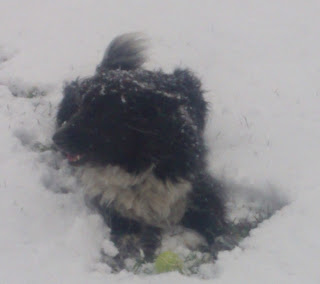 Isn’t that great, all that snow to play in?

By the way, I found out the other day that I hadn’t won the picture competition. A tiny little thing won it. I think he was a Yorkshire Terrier (I should know really shouldn’t I?) but I can’t remember his name.

You’ll never guess where I’ve been lately. I’ve been to Anglesey again, but only for the day this time. We went to look at another cottage; but I don’t think we’ll be moving there either. Oh dear. Mummy said there was a lovely ginger cat with ginger eyes living in the garden shed. I wonder if it will stay behind when they move away. I had plenty of little walks whilst we were there, so that was ok; and  I could smell the sea even though I couldn’t see it properly.

I haven’t been going upstairs to bed so often since my humans moved back into their bedroom. I’ve decided to stay downstairs occasionally.  I can stretch out better on my own, but of course it’s not as warm.

Talking of ‘warm’, I had a little accident one day, although it was mummy’s fault really.  We were playing with Mr Squeaky in the house and mummy missed catching it, so I dashed for it knocking over a cup of freshly made tea. It went all over me but most went on the carpet.  Mummy was worried that I had been scalded. Aunty Elizabeth did that last year and badly burnt her legs and had to keep going to hospital. Anyway I seem to have escaped safely and the carpet smells nicely of peppermint now.

One day I was walking along the cycle-path and a little black Labrador puppy came right up to me and started licking my face and ears, and we hadn’t even been introduced, cheeky wench. She was lovely though, but I’m afraid I growled at her. I was really tired that morning and couldn’t be bothered being nice. Another day I was even worse. I’d been charging through the bushes after rabbits and got all covered in those sticky things again. While mummy was trying to remove them a man came along with a Spaniel and a Labrador-cross who were playing happily together with a ball. Then I had to go and stick my nose in. Luckily the man was quick and caught me so that I could be put back on the lead. Mummy wasn’t happy. I had to stay on the lead for the rest of my walk.

Since then I’ve had a rotten few weeks lately. It has been so boring.   Chris has been going out a lot more. Sometimes we drop him off at that place that smells of wild things. 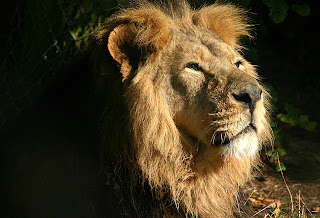 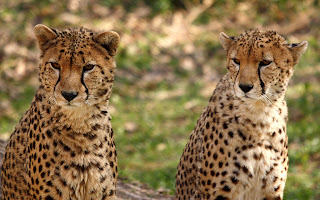 Mummy spends more time cleaning the house. She says my hair makes a lot of mess. They still both spend a lot of time on those little computers. Mummy says she’s looking for somewhere to live, but I know that Chris plays lots of games. Then there’s been lots of strange people coming into my house. People I don’t know. Some smelled of dogs and one even brought a tiny baby. Then I spent a boring morning at aunty Elizabeth’s and had to step into that funny moving box four times. I didn’t want to go in it the last time ‘cause I didn’t realise that we were going home. Then the next day I had to spend even more time at aunty Val’s. I was waiting for Chris to come and pick us up just after 2 o’clock but he didn’t come till nearly 4 and I was worried he wasn’t coming at all. The next day we went looking at houses and that was boring as well, because I had to spend quite a lot of time in the car, although I did get quite a few walks in new places as well.  In the woods was the best walk – it smelled of lots of lovely things and there were horses about too. At one place my humans were quite excited about seeing a Red Kite. We don’t have those where we live; we only have Buzzards and Sparrowhawks and stuff.

I’m still enjoying playing with Mr Squeaky. As soon as I’ve had my breakfast I pick him up and run into the garden inviting my humans to play. Mummy says it’s much too cold for her to play outside. She also says I look so happy with a funny little grin on my face, but that I have to let my breakfast go down before I run about. I don’t know what she means; I get so excited I just want to play!  Sometimes I’m a little sick, especially if I’ve just drunk a lot of water too, so perhaps that’s it. I charge up the garden with Squeaky and squash him to make lots of noise. It’s great fun. Trying to take him off my humans is best because I grab at him excitedly, and I’m told to be gentle so I don’t hurt, but I do tend to scratch hands a bit and pull holes in jumpers; all accidentally of course. In the house I like teasing mummy to chase me round the table to try to catch me and take Squeaky away, so that she can play with him. When she does I bark loudly asking for him back. One day I ran straight through her and she fell backwards onto the floor. Ha!

I’ve been down on the canal a few times near that wild place. Once we saw a dead white duck (mummy’s favourites) and a dead fox, both floating in the water. How did they get there?  We get foxes near where we live. I can smell them where they push their way through the hedge.

Anyway I think that’s all my news for the moment; my towels have just been washed yet again and need hanging out in the cold wind so I’ll say Bye for now. Perhaps mummy will play in the garden after that?