Hello everyone, It’s me once again.

Gosh I had a shock one night when I went up to bed – there was no bed. It had gone and so had everything else in the room. Well, actually it had been moved into another room because Chris wanted to paint ours. For the first few nights in the new room I couldn’t settle and didn’t sleep very well at all, so after my walks I kept nodding off.

I know I said in my last letter that nothing exciting happens here. Well, the very next day it did!  The first thing I saw on my morning walk was a huge lorry stuck on the grass verge up to its axles. The children from the nursery school had come out to watch it being rescued. Next, I saw a sparrowhawk perched on the gate by Park Farm with his back to me. I managed to get right up to him before he went, oof, and flew away. Then when we reached the bridge we had to turn back because it was not just flooded but running like a river. Coming away we met 3 dogs with their master and he said that Belle Vue Lane round the corner was also flooded, and that was our alternative route. So we had to retrace our way back passed our house and went towards the Rugby Club. Of course that way took us to where all the local cats lived . . . and, yes, I almost yanked mummy’s arm off trying to chase one. Then on the way home again a silly squirrel, unseen by me at first, decided to run across the road in front of me and I dashed off again. Luckily mummy was expecting it this time and I came up short on the edge of the grass verge. A very kind lady driving her car stopped in case I ran in front of her. Wasn’t that nice.

My Christmas Day started with a nice walk with mummy. For breakfast I had some bacon with my kibble. Then I found that I had been left two presents. The first one was from auntie Val (although she wrote Nanna on the label) and it was a penguin wearing a Santa hat and a rope tug. I loved it from the moment I saw it. I took about 30 seconds to pull off the bobble from the top of his hat and another 30 seconds to do the same with one eye. After a few minutes of playing with Chris I heard it squeak and loved it even more. Then it took about five minutes for me to pull off the tug-rope. I still liked playing with the penguin part of it, it was all good fun, especially when it squeaked.

I was then given my other present which came from auntie Sandy and Annie Spaniel. It was a huge biscuit covered in two colours of chocolate. By the time I’d eaten half of it (about 10 seconds) Chris took the other half away for another day. My afternoon walk was once again in the pouring rain and we went along the canal and back round some roads that I hadn’t seen before. After my tea of chicken and kibble I had a few little pieces of swordfish. And when I came in from my evening walk I had some custard stuff.  Wow, what a good day.

Each day I loved playing with my new squeaky toy, although it no longer resembled a penguin. Mummy kept putting it on the top of the radiator to dry off. She said it was horrible and slimy because I’d been licking it. Someone would squeak it and it drove me wild. I’d leap about trying to get it. I loved it so much that one afternoon Chris took me to the pet shop to buy me a squeaky ball as well. So many squeakies I didn’t know what to do with myself. I thought I’d gone to heaven. That very same evening, I was resting on my cushion when my tummy started rumbling, ‘so much so’ that Chris gave me an extra helping of tea!  Wow.

One day when Chris was out I kept pestering for more breakfast. Mummy had already given me a treat of more bacon in my kibble, then some fish and still I wanted more. She said I couldn’t have any because I hadn’t eaten all my kibble. But then when she had something to eat herself she gave me some toast – buttered mind you – not some of that other stuff. After that I still asked for more – and I ran off up the garden with teddy and a door-sausage from the dining room. In the end she begrudgingly gave me some more fish. I was perfectly happy then. But later, at lunchtime, I didn’t want to eat my biscuits because they hadn’t been dunked in Chris’s soup. Well he wasn’t there was he? Anyway by the time I’d had my afternoon walk I was ready to eat them, but I had to have two ‘sweeties’ as well!  Mummy said I was a pig and a spoiled child. What?

You’ll never guess what I’ve been up to.  I took Chris for a walk by the river one afternoon and then he went for a coffee, leaving me to guard the car.  Well Andy, who runs the café, invited me inside as they weren’t very busy and I settled myself down on the floor. While Chris was reading the paper Andy brought over his coffee and decided to join him for a chat and invited me to curl up on the settee, where I fell fast asleep! I don’t even do that at home.

I’ve entered two of my photos and some writing into a competition with Dog Friendly and, if I win, my picture might be used to advertise some new doggy product later in the year. I could also win a voucher to spend at Pets at Home. Just think of all the squeaky toys I could buy with it!  I’m so handsome I’m sure to win.  Aren’t I? 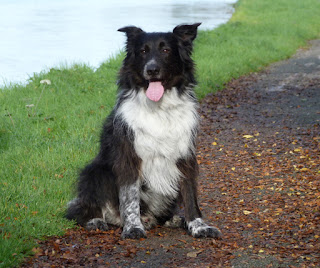 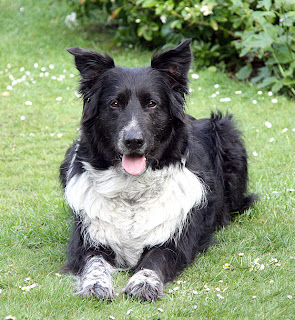 Oopsie!  I was a bit naughty one lunchtime. Mummy left one of my bonio biscuits on the dining room table whilst she went to make a drink. It was my last one for lunch and I thought she had forgotten to give it to me. SO, whilst she was out of the room I pinched it off the table. When she came back in with her coffee she noticed straight away that it was missing and caught me in the process of just finishing it off!  She said something like ‘Oh, Alfie you are awful’. I don’t know what she means, do you?

Golly, we’ve had snow. Have you? It’s been fun running about in it. And one morning Chris met us in the Rugby field with my squeaky ball. I had a great time chasing after it, but kept losing it in the deep snow. And mummy went skidding on the ice and fell over, again. Another time I was busy chasing lovely smells in the snow when it collapsed under me and I disappeared down a hole. Mummy thought that was very funny and laughed at me, but I thought she was rude and I walked away. 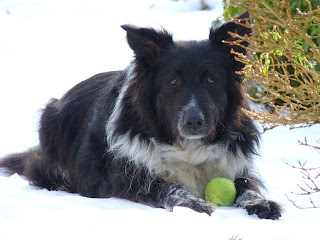 Me and Mr Squeaky in the snow

I get such a lot of fun from my squeaky ball. We’ve decided to call him Mr Squeaky and play with him every day. I go wild, barking with excitement. My humans chase me round the room trying to get him off me. Often they will sit on the floor at opposite ends of the room and throw him to each other, so that I have to run up and down trying to catch him. I’ve caused quite a few grazed hands and torn jumpers in the process of leaping up to grab it, and I’m supposed to do it gently and quietly (so as not to frighten the old b.. I mean lady next door). 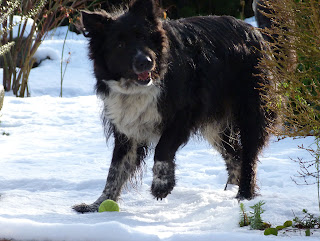 Earlier this week I was taking mummy for our early afternoon walk and decided to take a slightly different route from normal. As we were passing a pub we met an old man with a gorgeous girl called Sadie. She was a ghostly grey and white colour and was a cross between a Collie and a Lurcher.  The man said that she would be 20 years old in four months time. Gosh, that is old. I’ve a long way to go to reach that age.

This morning had seen a bright blue sky with a lovely warm sun. Mummy even sat in the garden for a while. After lunch we walked to the next village on an errand and guess what? It poured with rain whilst we were out, again.

I thought that, as I’ve filled up nearly three pages again, I’d better send you this one now.