This will be my last letter to you for this year, but don’t worry, I shall keep writing to you if you want me to, until you say  ‘Please  –  No More!’   I suppose, now that I’ve been here a while, you’ll be getting bored with my stories because not much different or exciting happens.  Maybe next year when we move house there will be new things to tell you about.  Ha – When!

Did you know, I may have mentioned it before, I think my humans really like me.  I get lots of cuddles and kisses (a bit soppy) and some days I get called everything but Alfie, such as Cuddly Bear, Cheeky Monkey, Gorgeous, Clever Clogs, Beautiful, Honey Bun and other such sickly stuff. I know I’m lovely so I suppose its ok.

Chris plays rough-and-tumble with me and sometimes we all play tug of war with some old socks. Mummy’s not very good at it, and she says I cheat because I put my foot on the sock or I pull it behind her so she has to let go!  In the garden we play with a stick or a ball (and sometimes in the house if its raining). So I keep myself busy and I prefer to be outside if I can. They often say to me that I’m a very good boy (I hardly ever get told off for being naughty – except the time when I picked Maddy Boxer up by the top of her head!) or that I’m ever so clever.  At the moment I’m being shown how to open the living-room door myself so that I can go to the kitchen for a drink.  Up till now my humans have had to drag themselves out of a comfy chair to open it for me. I know what to do really, but I pretend I don’t.

I had to look after mummy for a few days when she was ill in bed. We spent most of the time sleeping in the dark. I still went out with Chris for my walks though; I didn’t miss out on those, thank goodness. Since then I’ve had to look after both of them with one thing or another and, to be honest, it’s been a bit tedious. Running up and down stairs with cups of tea was the most difficult. (Only joking).  I still dragged them out for walks though – I’m sure the fresh air did them both a lot of good.

I can forecast the weather you know . . . even if it’s much too early for one of my walks I ask to be taken out because it’s going to rain. Of course then I’m told to wait and we end up getting a soaking – and it’s usually mummy!  I do love going on my walks though, especially to the different woods and other places we visit. I’m generally allowed off the lead for most of the time and I charge about through the trees hunting for squirrels.  During the heavy frosts I loved running madly about the fields sniffing rabbits and other wild things. Mummy calls me a wild child, but I still like her a lot and miss her on the days when she has to go out. Often when I’m busy investigating a rabbit hole or some other interesting stuff, they just walk on and leave me behind. Then I have to go racing after them to catch them up. Its great fun and I have a big grin all over my face and my tongue’s lolling out with excitement.

Actually I’m training them well – my afternoon walks used to be well after 3 o’clock when it was light, but I go out earlier and earlier now, so much so that I can go out soon after lunch, especially if we are going out in the car to somewhere interesting. In fact some days I go out before lunch!

In the evening I know when my humans are thinking of taking me out because they whisper to each other, things like “Whose turn is it to take mm-mm out?” and “Who’s doing the washing up?”  They think I don’t know what they mean, but I do because I’m up and ready to go before they can decide. After all I’ve done for them lately and they want to cut out these evening walks, now that it’s dark and horrible. They keep saying I should go in the garden instead, but I don’t like to. In fact I refuse to. I don’t even go out there at bedtime, which upsets my humans a bit. But I’m quite ok till the morning thank you. I’d rather go out as soon as I’ve had my tea, but I have to wait for them to say when it’s time. So I’ve wasted nearly an hour when I could have been sleeping.

Even so I think I’m very lucky here. I often get taken into the pet shop to buy my food – I get through rather a lot you know. Bags of kibble, biscuits and some chicken flavoured things we call sweeties, not to mention the little tasters of things they eat themselves, such as chicken, custard, beans and tasty fish AND SOUP on my kibble. I shall be trying porridge soon apparently, whatever that is. I also now have my very own VIP membership card for my shopping. My humans keep saying silly things like ‘If we give you a note and some money you could go and do the shopping yourself.’  Now that the wet weather is here I don’t have my meals outside in the garden very often, I have them indoors with my humans – in the dining room!  How spoiled is that?

Bye everyone, till next year.

Lots of love & wags from Alfie, and a big THANK YOU to the person who puts my blog on your website! 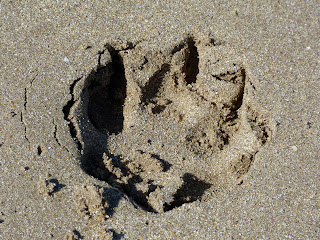 My big footprint in the sand 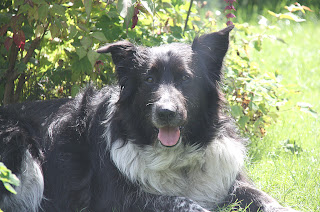 Summertime in the garden